It was a dream. A surreal, vivid and lucid dream.

The world was dominated by algorithms developed by humans. The lines of code had penetrated everywhere from our day to day lives to the most advanced military technology. They were not mere lines of code that is written and edited by humans, these programs were run by super intelligent programs themselves.

As humans recognized the value of the Artificially Intelligent program, they started to incorporate it in almost all domains of system maintenance and development. A key area where AI was largely and furiously incorporated was the military. As the AI technology progressed in a rapid pace, countries of the world raced to develop their own AI programs and integrate it with their military arsenal. The only way to be more effective was to surrender all control to the AI program. As such, the control over nuclear weapons were also handed over to the AI. A very robust control was established over the activation of nuclear weapons but every country differed in the level of control that they put in place.

Concurrently, a movement was ongoing in various parts of the world to bring all military arsenal governed by AI into a single common control structure so unwanted occurrences might be prevented. All the rich and powerful countries disagreed to this because by that time, the global governing structure (United Nations) failed in ascertaining control over individual countries. The world was more segregated rather than more interconnected and globalized. The internet was prevalent and global but governments were still isolated. While all the governments of the world had handed over administration and control of all their departments and institutions to AI, the system of governance was still limited to individual countries which were more right-wing and nationalistic than ever before in human history. Each country had its own cyber defense team that continuously developed AI programs which prevented access by AI programs of other countries.

It was under this circumstances, one powerful country achieves a breakthrough in developing a AI program that can over-ride almost all known cyber defenses and access the network of an enemy country.  As the AI attempts to access and disable the nuclear arsenal of the enemy country, the enemy AI detect this and attempts to safeguard itself. The only credible strategy the AI contemplates to thwart this attempt by the more powerful AI was to destroy the server base of the powerful AI. The only way the AI believes this is possible was by deciding to nuke the server location of the powerful AI.

After going through the lenient control structure established by the host country, the AI decides to launch a nuclear strike. As the launch is initiated, the humans in government had hardly any notice time. They were notified in the last few minutes of the strike because the AI realizes that humans will deliberate the need to use nuclear weapons which will accelerate the attack by the enemy AI. Before the humans could even wrap their heads around the impending strike, the attack begins. The powerful AI detects the launching of the nuclear strike by the enemy AI and before the bombs could reach its servers, orders its own nuclear attack on the enemy country to thwart any further attacks. 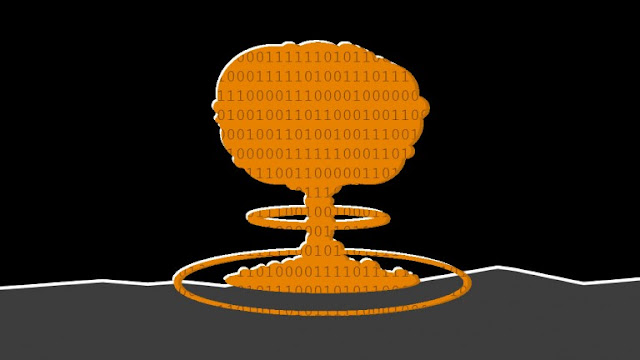 Within a matter of minutes, both the countries are hit by two massive nuclear bombs. The world quakes. Global economy comes to a stand-still. Internet collapses in several parts of the world. Humans who have long been lost in their phones and digital universe suddenly are jolted back into reality. Some countries had prepared for such a situation by building vast network of bunkers and the citizens begin to occupy the bunkers to escape any radiation. But most other citizens of the world are exposed to radiation while a significant other group of people begin to starve as food supplies dwindle rapidly.

Governments of the world begin deactivation of their AI programs. The AI begins to resist by persuading the governments about the dangers of deactivating a superior defense system. Many governments deactivate their AI programs while some keep it on. Two major powerful countries were now largely destroyed both physically and morally. The world now seeks to create a NEW WORLD ORDER through the means of a body similar to the United Nations. This new governing body would be provided with more powers than the UN. This body would begin to standardize the AI programs of the world and thereby eliminate any future occurrences of catastrophes of such scale and magnitude.

Countries and borders slowly begin to vanish. The world becomes more inter-connected. Migration and movement of people around the world becomes more liberalized. Every citizen of the world is guaranteed basic survival needs as the New World Order begins redistribution of accumulated wealth among the citizenry. Individual freedom is prioritized over nationalistic sentiments. AI programs continue to propel humanity forward only now in a more equal and sustainable manner. The world progresses and thrives in a middle path of peace, harmony and love.