So, I bought a beautiful blue Ford Fusion in March 2015. The car was just amazing and as the days went by, I only grew to love the car more and more. The car gave me some issues here and there with one major spending in August ($900) but that's understandable - mechanical wear and tear. In January 2016, right before I was about to take it to Toronto for a work event (from Windsor), I noticed a puddle of gas under my car after I full-tanked it. I bent down to get a proper look and the gas was trickling down, not even dripping.

I was shocked and as anyone would do, I googled and read several posts that said it was okay to drive with a leak but there were couple of dangers involved. One was, if it catches fire then BOOM! The other being environmental pollution. After discussing with my friend and trying to see some logic, I figured I had to get it towed to a mechanic. I also had to call up the Fire Department to clean up the gas that I left behind in the parking lot of Tim Hortons which they cleared. The car was dolly-ed to a mechanic and he identified that the top of the gas tank had an issue (leak) and that, upon his investigation was part of a recent recall notice that Ford had given out. I was very relieved to hear that the issue can be fixed over a recall.

I called up Ford Customer Care to make sure there is a recall for this issue and I am not just being momentarily happy. Upon reviewing my VIN and other details, the Customer Care Agent did tell me there was a recall and gave me a recall number as well. I was so relieved and booked an appointment with the Performance Ford - Windsor.

I am writing this just as I returned back to my office after leaving the car at the dealership. I was told that they would inspect it to see if the issue with the leak was related to the Recall issue. If it was, they would have to ground my car for some MONTHS! As they do not at the moment have the parts and expecting it to arrive by THIRD QUARTER of 2016!!!!!!! I am in the FIRST QUARTER now! The service person did tell me she hoped to receive it sooner though. They would arrange a rental car as a replacement until my Fusion was fixed with a new tank or the issue was resolved.

I will write more as things play-out!

I was given a Ford Escape 2015 as the replacement for my Fusion which sits at the dealership now for who knows how many months.

I am planning to give it visits from time to time to make sure the car is doing well.

In the meanwhile, the Escape has given me a really good first impression and I am hoping for this to last. Cheers :)

I sorely miss my Fusion. I just want to go see how it is doing there all alone! In the mean time, here is a majestic pic portraying the stunning Fusion! 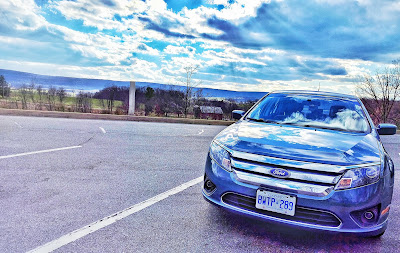 I sorely miss my Fusion. This Escape has been drinking gas like it is fucking thirsty all the time. A full tank holds about 40L of gas which is very less given this is a mini-SUV. Anyways, I am planning on changing this SUV for a Fusion 2015 or 16 if they got it at the rental. Hopefully they give it to me.

Oh a LOOOOOOOOT had happened in the meanwhile. I had to spend about $1000 for the rental that I was using. The rim was chipped while under my usage - probably a pothole - misfortune number 1. Spent the money by the middle of February. I called Ford Customer Care to help me out here because I am in this mess only and only because my Fusion was with the dealership STILLLLL to get the gas tank fixed.

Now recently, I had some fun loving prankster scratch the breadth of the driver's door of the rental with his key. The key scratch is prominent and I am going to have to spend again. Just to mention, the Ford Edge I am driving now, although is great, drinks gas so much. I am spending way more than I would have with my fusion. This is completely insane.

I am now planning to write about the situation in Facebook and see what kind of reaction I might get.

My Fusion is still not with me and there is NO update on the ETA for the gas tank from the dealership. This is beyond a normal operating procedure and has put me to immense troubles. The rental keeps recalling their cars to change into another one and has put me in major inconvenience.