The residents and merchants of Coimbatore are very well aware of the current situation of the Mettupalayam road that stretches from Sai Baba Koil to Periyanayakenpalayam which comes around 20 kilometers.
The road (not actually) just exists for a name sake. The road doesn't solve its purpose.

The road that was laid by the British over 75 years ago was still strong and perfect for a long time. It was laid as a concrete road that stood strong as a rock for years with lovely green trees on either side. It made journey very pleasant for anyone who went to Ooty through that road. 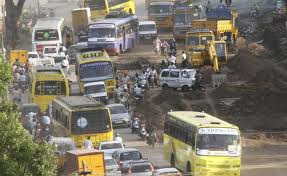 But as the economy boomed and trade developed, the road needed expansion as the former road was just a single track road where one vehicle can go up and an another coming down. The journey which was once happy and joyous now started turning hectic and stressful as the cars had to line up for a long time for the traffic to clear during peak hours and summer holidays when tourists flock to Ooty. That road is a State highway and funding for expansion or re laying of the road must be undertaken by the Sate Government.

So, on request of public and commuters, the re laying of the 20 km stretch started off on some date in 2010 soon after the World Tamil Conference was over.
The tress on either side were all cut down and space  was made for the new road. People though were upset that the trees were cut down, they were contended because of the new 4 lane road that was about to come up.

Works started by digging out one lane and laying it so that traffic can be diverted to the other single lane and after that lane was laid, traffic can be diverted to the new lane and works can progress on the other lane. Around 9 kms were dug up. They were dug up but nothing happened more than that. The private construction consortium that took up the job ran out of funds and stalled the works. Other than tourists, the stretch had many important offices and very busy junctions in it. Thus, the damaged road made it hard for people to commute across these junctions and get to their offices. Sand stroms started spiralling where the roads were dug up. The travelers needed goggles and masks to cover their faces so that they are safe from the dust and pollution on the road. The street lights were taken away and night travel was more hectic than the day one. And as the rain started, all the pits and bumps were filled with water and 2 wheelers had to pay for their vehicles and for them. They wouldn't know where pits and bumps are there because it will all be filled up with water.

During summer, dust raised by the vehicles using the road made driving difficult and when it rained, the rain water covered the pits and made driving dangerous.
Several accidents had happened on the road. Major industries and educational institutions were located in the area and several students, workers and employees used the road every day. However, since the road was bad, they were unable to reach the educational institution or workplace on time.
Those in need of emergency healthcare were also unable to rush to the hospital. 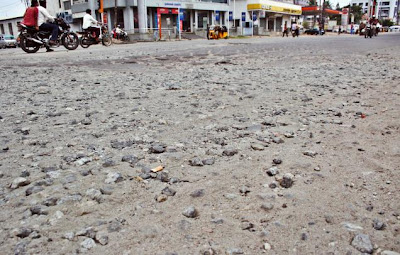 After wide spread protests and thousands of petitions to the collector, work began again as the corporation funded the consortium. The dug up sections were laid but the other parts were now broken and several places needed heavy repairs. The work is still going on and one cant even imagine the plight of the people travelling on this road. Around 60% of the works are now over and 12 kms of the stretch now has 4 lanes.

If the work is completed soon, then this road would become a travelling fun for everyone which is now a misery. The concerned authorities must look into this. As if this blog entry is going to matter...!!